15 DOMESTIC CASES and three imported cases were announced at the Central Epidemic Command Center (CECC) daily press conference today. Six of these cases were already in quarantine. Four deaths were also announced. There were seven cases in New Taipei, five cases in Taipei, and three cases in Taoyuan.

Second dose Moderna vaccinations are available for categories one to three for those that already have their first dose now.

The CECC was asked about policy for mixed vaccination again, specifically with regards to Jaw Shaw-kong of the KMT criticizing CECC policy as deliberately unclear and intended to boost AstraZeneca vaccinations. The CECC has continued to stress that it requires more information on the safety and efficacy of mixing vaccinations. 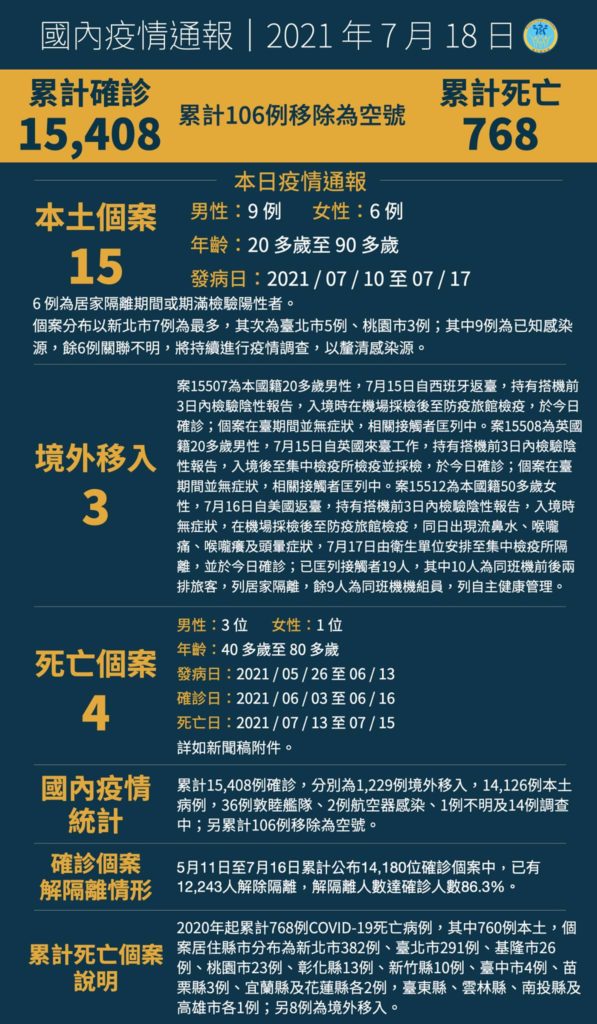 Information on the new cases from today. Photo credit: Ministry of Health and Welfare/Facebook

A man in northern Taiwan has been vaccinated with AstraZeneca, BioNTech, and Moderna vaccines. The BioNTech vaccines were obtained during a trip to the US, while how the man was vaccinated with mixed vaccines is under investigation. It is believed that the man is Taiwan’s first case of an individual vaccinated with three mixed vaccines. Some speculation is that this is because early self-paid AstraZeneca vaccines were not properly registered in the vaccination system, that there may have been oversight, or that the issue ultimately is due to any cross-border vaccination check.

The CECC stated that such cases of individuals slipping through gaps in vaccination are likely to become rarer in the future, with increased checks for vaccination history through National Health Insurance cards. The man does not appear to have any symptoms, but the CECC stated that there is no proof that this combination of vaccination increases efficacy and that this adds to the possibility of side effects. Although the CECC emphasized that it does account for self-paid vaccinations, government-paid vaccinations, and is working with other countries to establish proof of registration that is bilaterally accepted, it is difficult to investigate if people have become vaccinated while abroad. The CECC called on people to be responsible in terms of vaccinations.

A group of high-ranking Executive Yuan staffers has come under scrutiny after violating restrictions on indoor gatherings to eat hotpot at a villa restaurant. More than ten individuals were present at the hotpot gathering. Premier Su Tseng-chang has been informed of the incident, with calls for disciplinary measures. According to Minister of Health and Welfare Chen Shih-chung, further investigation is required, if there will be punishment depends on local authorities.

Audrey Tang’s trip to Japan for the Tokyo Olympics has been canceled, due to the escalation in the COVID-19 situation in Japan, and increased measures.

The Xinsheng branch of Din Tai Fung has been closed due to a COVID-19 case there.

There has been some anger in Taipower after reports of senior executives being vaccinated while at-risk frontline personnel have not been vaccinated.

According to the Liberty Times, more than one million have changed their vaccine registration to be willing to be vaccinated with AstraZeneca vaccines this week.

A case of a man in his forties that died today had underlying conditions, including diabetes and high blood pressure, and had travel history in Wanhua.

The CECC is not requiring regularly scheduled COVID-19 tests for medical personnel who have been fully vaccinated, but if hospitals require this for their workers, such tests will be paid for by the government. 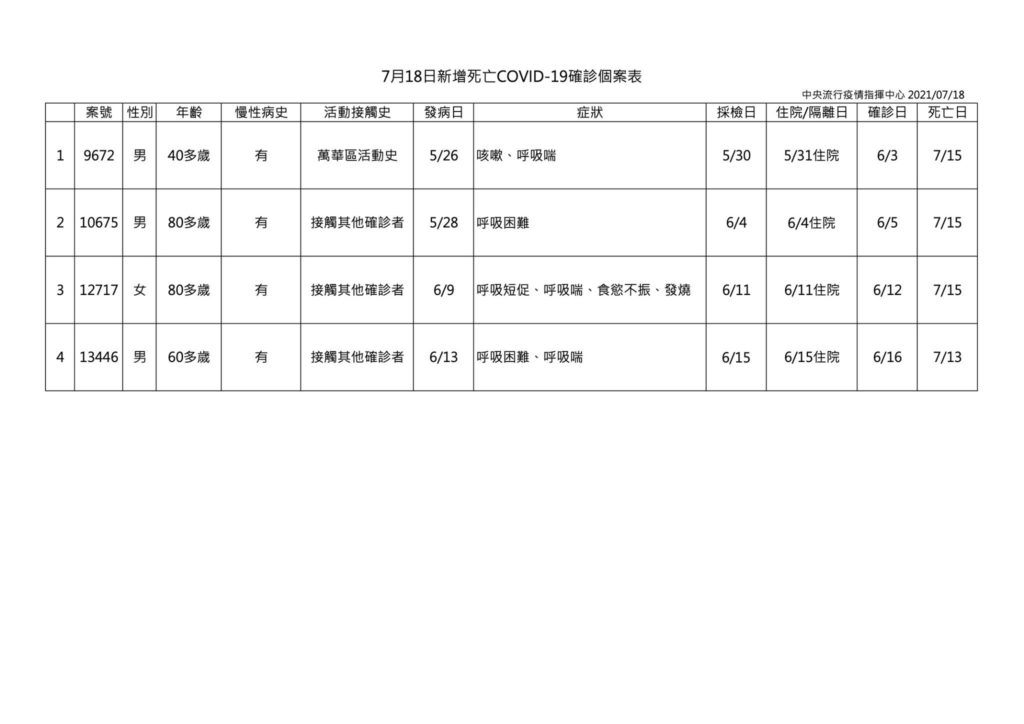 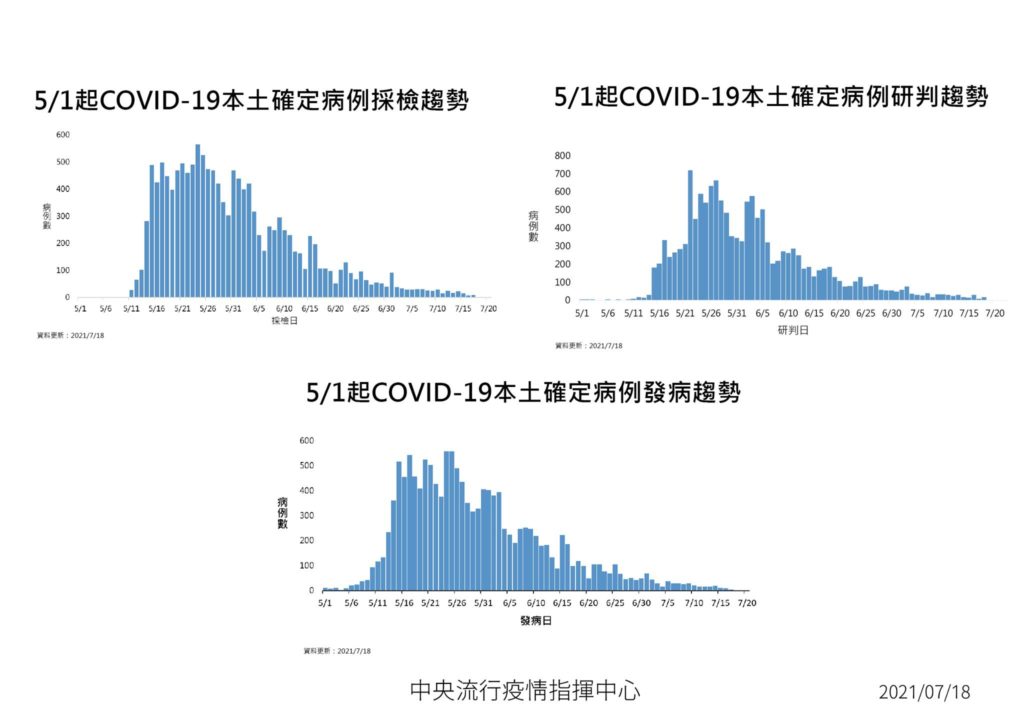 Information on the new deaths announced today (left) and further data released by the CECC (right). Photo credit: Ministry of Health and Welfare/Facebook

Workers at elementary schools will be vaccinated from July 20th to July 23rd, in anticipation of schools reopening. Regular testing will be required for exercise facilities that reopen and such facilities will be required to submit plans about how they intend to maintain social distancing measures before they reopen. Some museums will be reopened on July 24th though visitors must make appointments to do so. Appointments will begin on July 24th.

Hou called for increased monitoring of ports due to the possibility of individuals avoiding testing and entering Taiwan. Boats carrying foreigners involved in smuggling were found on July 12th and July 16th, who were tested and quarantined, as other travelers to Taiwan would be.

There have not been any cases of individuals that became infected with COVID-19 after returning from Guam so far, but there has been one case of an individual that was vaccinated with one dose of BioNTech while abroad and returned to Taiwan with the Delta variant. There have also been cases of individuals that caught COVID-19 despite being fully vaccinated with BioNTech abroad. The CECC has stressed that it is still possible to become infected with COVID-19 after vaccination.

As individuals that live together can take off their masks while in the same car together, Chen stated that this relaxation of measures was due to the more stable COVID-19 situation now, compared to how more stringent measures were previously required. It is difficult to check if all individuals that take off their masks while in cars actually live together, nor does Chen call for investigating all such cases, but Chen called on the public to be responsible.

After comments by former TSMC chair Morris Chang following the APEC conference, which Chang represented Taiwan at, KMT chair Johnny Chiang has called on the Tsai administration to allow the KMT to purchase vaccines. Some have understood Chiang’s comments as calling for the KMT to be allowed to negotiate vaccine purchases as a party, which is a step beyond pan-Blue local governments seeking to negotiate vaccine purchases on their own. 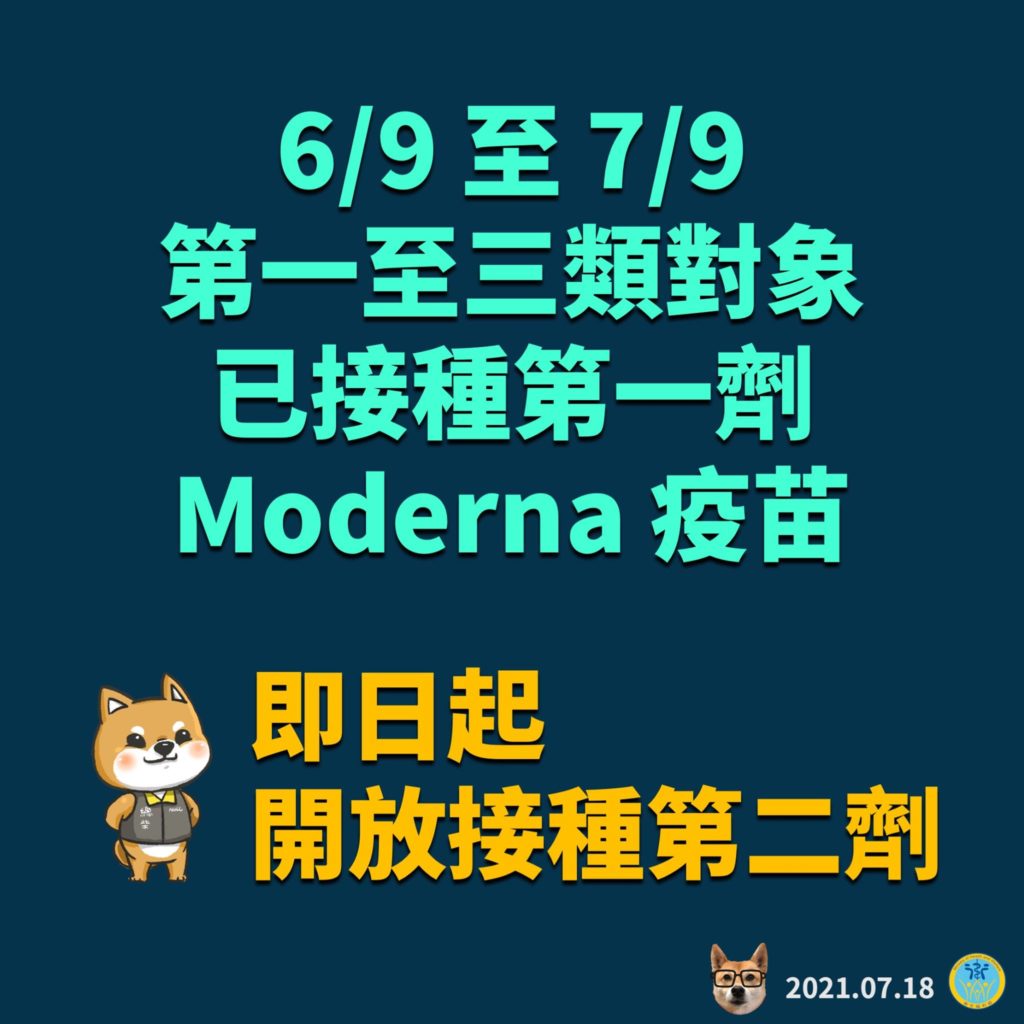 Infographic on the opening up of second dose Moderna vaccinations to categories one to three. Photo credit: Ministry of Health and Welfare/Facebook

Along those lines, the Executive Yuan has stated that it cannot reveal the budget for vaccine purchases, in line with confidentiality regarding vaccine purposes. Though this is normal, reflecting the enormous power that pharmaceutical companies have—even over national governments—it is probable that the KMT may seek to attack the DPP on what it claims to be lacking transparency. There have been some attempts to claim that the lower price per dose for domestically-manufactured vaccines versus imported vaccines reflects favoritism on the part of the DPP.