In celebrating the opening of a Dollar General distribution center and the 300 distribution and private-fleet jobs it will bring to the Northern Kentucky city of Walton, Gov. Andy Beshear, company leaders and local officials noted a long history and bright future shared by the Commonwealth and the company. 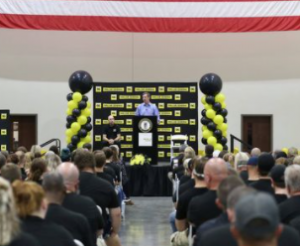 “Joining with Dollar General’s leadership team, new employees and local leaders to help open this facility today makes a clear statement about the direction of the company and Kentucky,” Gov. Beshear said. “Dollar General’s decision to add new operations in our state highlights Kentucky’s key location for the distribution and logistics industry, a sector seeing supercharged demand as we sprint out of this pandemic. My congratulations to Dollar General and the many people who worked to make today’s announcement possible. As our economy accelerates, we look forward to seeing this facility at full scale and the company’s eight-decade partnership with Kentucky continue to flourish.”

“We are excited to celebrate our Walton distribution center grand opening and to continue supporting Kentucky communities,” said Dollar General Chief Executive Officer Todd Vasos. “Dollar General’s roots run deep in the Commonwealth, and we are grateful for the partnership from state and local teams including Gov. Beshear, Northern Kentucky Economic Development, Boone County Judge/Executive Gary Moore, the Northern Kentucky Chamber of Commerce, the City of Walton and the Kentucky Cabinet for Economic Development that helped us further invest in the state. We look forward to welcoming new employees into the Dollar General family and being a longstanding business partner in the Boone County community.” 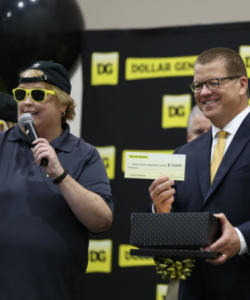 To demonstrate Dollar General’s commitment to the Walton Community and its mission of Serving Others, Dollar General presented a $10,000 donation to Walton-Verona Independent Schools to support local literacy and education initiatives.

Dollar General’s roots trace to 1939 when Scottsville, Kentucky-based J.L. and Cal Turner opened J.L. Turner and Son Wholesale with an initial investment of $5,000 each. Their first Dollar General store opened in Springfield, Kentucky, in 1955, and the concept was simple – no item in the store would cost more than one dollar. The idea became successful and other stores they owned were quickly converted from wholesale to retail. Today the company, based in Goodlettsville, Tennessee, operates more than 17,400 stores in 46 states and trades on the New York Stock Exchange under the symbol DG.

In Kentucky, Dollar General’s presence now includes two distribution centers – the other being in Scottsville – as well as nearly 640 stores and a growing private fleet in Walton that collectively employ approximately 6,000 Kentuckians. The company is also in the final construction phases on a third distribution center, a 160,000-square-foot DG Fresh facility in Bowling Green.

As a target industry for the state, the logistics and distribution sector employs nearly 80,000 people at 590 facilities across Kentucky. Due to online ordering throughout the pandemic, warehouses and shippers saw surging demand and expansion opportunities. In the past 12 months, distribution and logistics companies committed to creating nearly 2,000 full-time, Kentucky-resident jobs over the coming years with 34 facility expansions and new-location projects statewide. Those projects promise to bring nearly $285 million in private-sector investment to the Commonwealth.

In early July, thanks to strong fiscal management by the Beshear administration, the state budget office reported the Commonwealth ended the 2021 fiscal year with a general fund surplus of over $1.1 billion – the highest ever in the commonwealth – and a 10.9% increase in general fund receipts to $12.8 billion.

So far this year, Gov. Beshear and his administration have announced over $2.2 billion in total planned investment in Kentucky from the private sector with new location and expansion projects creating 4,700-plus full-time jobs in coming years. Through May, Kentucky’s average incentivized hourly wage is $23.15 before benefits, a 4.7% increase over the previous year. 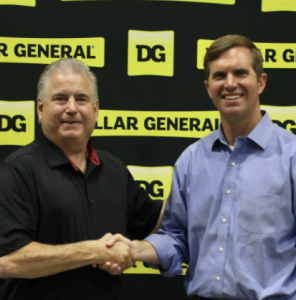 In May, Moody’s Analytics published a positive economic outlook for Kentucky, noting mass vaccination as the driving force behind a sustained recovery in consumer services. The state’s recovery, Moody’s said, benefited from earlier reopening efforts and increased demand for manufactured goods over services. The report also found Kentucky’s manufacturing industry outperformed the nation’s since the national downturn last year.

Fitch Ratings in May improved the state’s financial outlook to stable, reflecting the commonwealth’s solid economic recovery. The state’s April sales tax receipts set an all-time monthly record at $486.5 million, as did vehicle usage tax receipts at over $64 million.

In March, Site Selection magazine’s annual Governor’s Cup rankings for 2020 positioned Kentucky atop the South Central region, and third nationally, for qualifying projects per capita. The commonwealth also placed seventh overall in total projects, the highest of any state with a population under 5 million. Site Selection also recently placed Kentucky in a tie for fifth in its 2021 Prosperity Cup rankings, positioning the state among the national leaders for business climate.

“Seeing Dollar General’s distribution operation rapidly go from concept to functioning facility is a testament to both the company and the support businesses receive here in Northern Kentucky,” Judge/Executive Moore said. “My thanks and gratitude to the company’s leadership for their investment and job creation. We look forward to a successful relationship ahead.”

“We are very excited to welcome Dollar General to the City of Walton,” Mayor Brown said. “They have a reputation for providing quality, good-paying jobs, satisfied employees and for being great community partners. Dollar General is as American as apple pie. Their continued growth and stability ensure that they will be a part of our community for decades to come. I wish them continued success and look forward to them being a great addition to our wonderful town.”

“Dollar General is an outstanding corporate citizen and we join the City of Walton in celebrating their investment in Northern Kentucky,” Crume said. “We appreciate Dollar General expanding its supply chain network and creating hundreds of jobs in the Cincinnati region.” 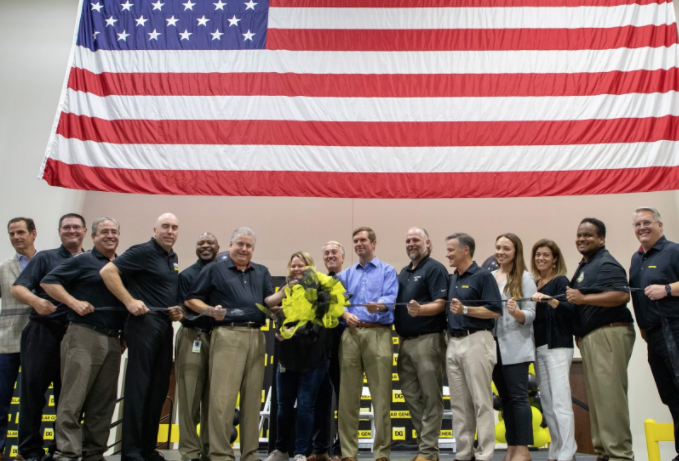 To encourage investment and job growth in the community, the Kentucky Economic Development Finance Authority (KEDFA) in June 2020 preliminarily approved a 10-year incentive agreement with DG Midwest, a wholly owned subsidiary of Dollar General, under the Kentucky Business Investment program. The performance-based agreement can provide up to $750,000 in tax incentives based on the company’s investment of $65 million and annual targets of:

• Creation and maintenance of 250…