Since 10 May 2021, Israel’s military offensive on the Gaza Strip has cost a devastating human toll. As of 20 May 2021, 6:00 pm, the Palestinian Ministry of Health in Gaza reported 232 Palestinian casualties, including 65 children, and 1,900 injuries.[1]Al-Haq’s field reports have documented the indiscriminate and systematic attacks of the Israeli Occupying Forces (IOF) in the carrying of ariel bombings over the Gaza Strip, targeting high-rise tower blocks, residential buildings, commercial properties, administrative institutions, cultural and religious centers, banks and agricultural lands.

The economy has long been the sinews of war. Whether by directly targeting business sites or by causing collateral damage to commercial properties, the Israeli Occupying Forces (IOF) seizes the opportunity to deeply and sustainably affect the Palestinian economy already on the fringe of collapse. More than 80 percent of Palestinians depend on international aid, without alleviating a continuing cycle of poverty – with a poverty rate above 50 percent in 2017, food insecurity, lack of drinkable water, and inadequate healthcare.

Meanwhile, the Gaza real per capita gross domestic product (GDP) dropped by 29 percent in 2019 compared to 2006 – ”The precipitous deterioration prompted the United Nations to warn that Gaza might become unliveable by 2020”.

Direct Targeting of Civilian Banks and Financial Institutions as Military Objectives
A certain number of financial businesses, including different branches of the Islamic National Bank and the Palestinian Production Bank, have constituted direct military targets by the Israeli Occupying Forces:

On 13 May 2021, at around 6:10 am the headquarters of the Islamic National Bank, located at the basement level of Haydar Al-Agha Tower, near the Abu Hamid roundabout, Khan Yunis, was targeted, bombed, and completely destroyed by two IOF missiles.

On 13 May 2021, at around 7:55 am, an Israeli drone fired three missiles at the Islamic National Bank, in the Doha Building, Omar bin Al-Khattab Street, Rafah. Ten minutes later, an Israeli warplane launched another missile, leading to severe to moderate material damage to a number of offices.

On 15 May 2021, Israeli warplanes completely destroyed, at 10:20 pm, the headquarters of the Islamic National Bank located at the bottom of the Kazem Abu Shaaban building in the Al-Rimal neighborhood in the center of Gaza City.
On 15 May 2021, the Israeli Occupying Forces targeted and completely destroyed the Nour al-Din building, located on Al-Shifaa Street, Gaza City, owned by Hussam Fuad Nour al-Din, whose ground floor hosted the Palestinian Production Bank.
Indiscriminate and Intended Collateral Damages on Business Properties

On 11 May 2021, the Galilee Ice Cream Factory owned by Khalil Habib was completely destroyed, at Street 10 near Kuwait Junction, southeast of Gaza City, in addition to the partial damage of neighboring factories.

On 11 May 2021, a factory belonging to one of the Palestinian resistance factions, in the Abu Al-Khair Industrial Zone, near Al-Qurum roundabout, Jabalia, northern Gaza Strip, was targeted.

On 11 May 2021, at approximately 7:45 pm, Israeli warplanes destroyed the 13-floor Hanadi Tower, next to the fishermen port, west of Gaza City, home to a number of offices of private companies.
On 12 May 2021, at around 12:30 pm, Israeli warplanes targeted Majed Hamed Bakir Al-Yazji’s building, Al-Nafaq Street, Al-Manara neighborhood, near Al-Tawalbeh Mosque, east of Gaza City. A special factory for electrical appliances was located below the third-floor building.

On 13 May 2021, at about 1:10 am around 20 missiles were launched on eight houses located on Beit Lahia Street, the center of Beit Lahia, north Gaza.

On 14 May 2021, around 2:30 am, Israeli warplanes destroyed the Mahmoud Abu Halima Sons Company for Iron Formation and Trade, located opposite Al Shawa Petroleum Station, at the intersection of Mansoura Street with Salah Al-Din Street in Al-Shejaiya neighborhood, East of Gaza City, notably causing excessive and disproportionate damage to a number of shops and industrial workshops located in the vicinity of the targeted company. Muhammad Mahmoud Abu Halima, the company owner, estimated his economic loss to three million US dollars.

On 15 May 2021, at approximately 11:25 am, Israeli warplanes bombed the Al-Hasoumi shops for the sale of building materials in the Al-Atatrah neighborhood, northwest of Beit Lahia, North Gaza, with two missiles.

On 15 May 2021, Israeli warplanes bombed the 12-story Al-Galaa Tower, located on Al-Jalaa Street next to the Watan Tower in the center of Gaza City, notably containing six floors of commercial offices. Al-Galaa tower was completely demolished and neighboring commercial buildings were severely damaged.

On 15 May 2021, at around 5:15 pm, Israeli warplanes bombed the Shehadeh family’s building, in Jabalia camp in the northern Gaza governorate, leading to the complete destruction of the Al-Kurdi stores for materials company, located on the ground floor.

Some minutes later, the Israeli artillery shelled dozens of bombs in the northwestern areas of the town of Beit Lahia in the northern Gaza Strip, causing a huge fire in the adjacent Khudair Brothers and Medawar Medicines Companies. 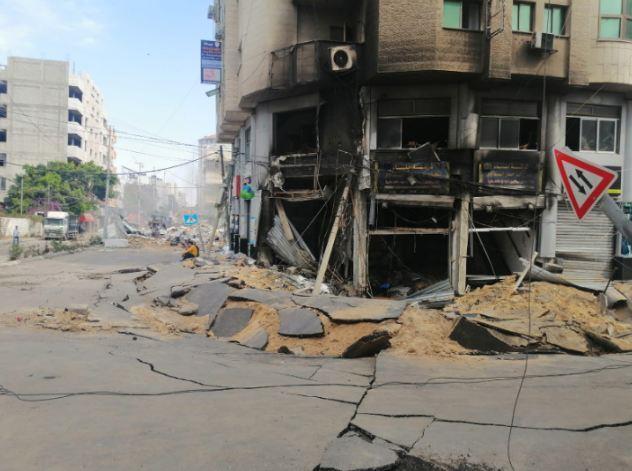 On 17 May 2021, nine factories and warehouses, located in the industrial zone east of the Shejaiya neighborhood, east of Gaza City, were bombed by the Israeli Occupying forces, while they were already experiencing economic hurdles due to the Corona outbreak, and the long years of the siege on the Gaza Strip. Among the demolished factories: Al-Harir Factory for the manufacture of chips, Siksek factory for plastic pipes, Al-Wadia factory for food industries, Maatouq ice cream factory, Clever detergents factory, Abu Iskandar nylon factory, Company PWS Renewable Energy, Bedkou, and the Rafiq Textiles & Readymade Garments Company.

On 17 May 2021, at approximately 5:10 pm, the six-floor Mashareq building of the Ministry of Endowments and Religious Affairs, near Ansar South Junction, west of Gaza City, housing the Mashareq Media Company, the headquarters of the General Administration of Women’s Work, the headquarters of the Ministry of Endowments and Religious Affairs, the headquarters of the Orphans Care Fund, the Al-Nahda Library and Talal Abu-Ghazaleh’s audit office. The initial bombardment severely damaged the architecture. The building was the target of a second bombing at approximately 1:35 at dawn on 18 May 2021 that resulted in its complete destruction.

On 18 May 2021, around 1:30 pm, the IOF targeted a store of paint materials owned by the Hanif family, Khirbet al-Adas, northeast of Rafah.

Large-Scale Destruction of Al-Rimal Neighborhood will have Long Term Impact on the Socio-Economic Viability of Gaza City
Significantly, from 11 May 2021, the Israeli Occupying Forces initiated a series of systematic and violent bombing blasts on the Al-Rimal…

Read More: Attacks on Business Properties by Israel”s Offensive in Gaza: Sweeping and