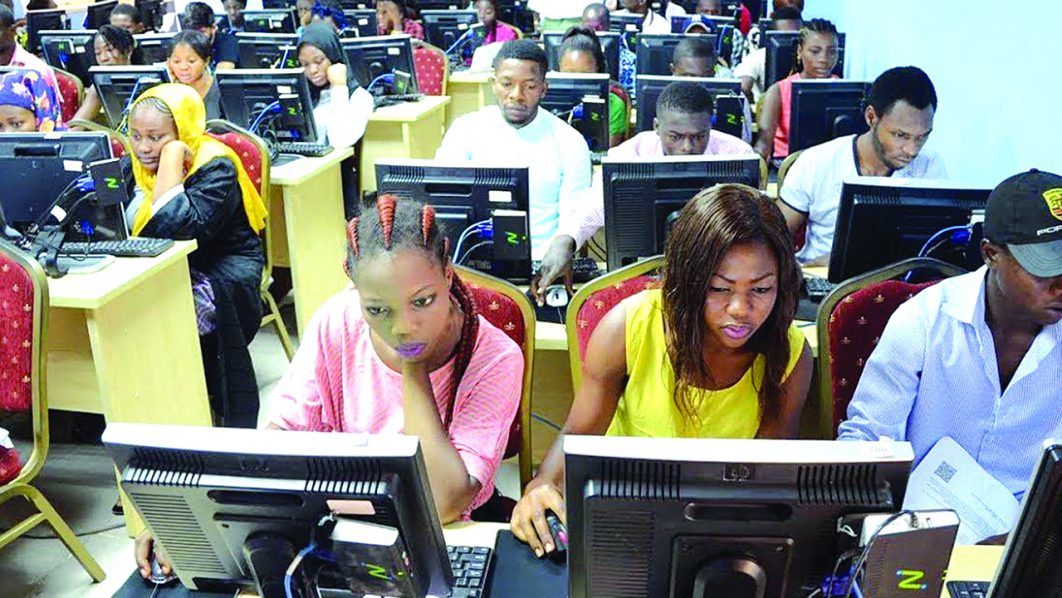 Youths during an e-learning session

Efobi Chiagazie and Aaron Jegede are classmates, and pupils of Bright Rainbow International School, located in the Mushin area of Lagos State. Like other pupils in the state, they experienced an unprecedented 2019/2020 academic session, which was occasioned by disruptions on account of the Coronavirus (COVID-19) pandemic, and the #EndSARS protest, which also rocked different parts of the country.

While the six-month COVID-19-induced school closure lasted, the need to migrate academic activities online and remotely teach pupils arose and their school were one of those that fancied the idea and plunged into it in view of its mounting benefits.

Consequently, for about three months, Chiagazie and Jegede were taught remotely by their teachers via WhatsApp, voice notes and YouTube.

In some other schools across the country, teachers and school authorities employed a variety of media to engage their students. Animated videos, voice notes, text notes were some of the vehicles deployed, even as a range of online platforms and tools like Zoom, Google meet, and Google classroom was also in the mix.

The six-year-olds have their parents and school to thank for affording them such luxury in a country where infrastructure for remote/online learning is sparse. Some of their neighbours and friends, who attend public schools, or less endowed private schools were not that lucky, even though they are also city residents.

Since schools were hurriedly shut down on March 23, 2020, most public schools across the country never attempted anything along the line of online teaching for obvious reasons- and that is the country’s failure to have supporting structures in place, or a technology that caters for the remote teaching of the estimated 46 million students that were affected by the lockdowns.

Public schools’ students in far-flung hamlets and settlements across the country suffered the same fate as some of their counterparts in metropolitan centres because of the poor facilities and resources at their disposal.

All across the country, there are signs that a lot needs to be done to radically change the fortunes of education. But the amount allotted for education yearly, experts contend, is in sharp contravention of the 15 to 20 per cent recommended by the United Nations Educational, Scientific, and Cultural Organisation (UNESCO).

On their parts, most households do not have the amenities to engage their children/wards in remote/e-learning. Where the average family is not poverty-stricken, it is battling with Internet network fluctuations, high data consumption, as well as fluctuating power supply all of which constitute a disincentive to e-learning.

Absence Of e-Learning Infrastructure Hobbling Learning In Emergency Situations
WITHOUT a doubt, disruptions to the school’s calendar come with a heavy price, including socio-economic dislocations. Just as many are trying to overcome the consequences of the pandemic, there are growing fears that the North, already disadvantaged with hosting the highest amount of out-of-school children in the world, is playing with a ticking time bomb, especially with the recent closure of at least 618 schools over banditry and abduction scare. States affected by the bedlam include Yobe, Zamfara, Niger, Katsina, Kano, Jigawa and Sokoto.

It is the grim reality, and the implications as acknowledged by UNESCO that makes laudable, the efforts of some organisations that recently partnered to launch a first of its kind audio e-learning platform, http://www.learnathome.radio, which provides curriculum-based educational aid and resources for pupils and students from primary four to senior secondary three (SS3).

At the behest of Data Science Nigeria, Malezi, and Mastercard Foundation Nigeria, the Learn at home audio e-learning platform is unique for its inclusivity. In other words, for the first time, over 100 million young Nigerians can prepare for their final examinations with the aid of highly experienced and exceptionally skilled teachers, no matter where they live in the country, or their backgrounds. Already, more than four million students have joined audio classes with USSD/SMS support.

UNESCO, while doing a summary of the impact of the pandemic, as revealed by its 2020 data, concluded that nearly 40 million primary and secondary students in the country were affected by school closures, including those in internally displaced camps.

Sadly, for many of these schoolchildren, particularly those in disadvantaged rural communities, learning came to a complete halt, an absurdity in the 21st Century.

Attempts to cushion the effects of the school closure through the adoption of remote learning proved a Herculean task, as a result of the structural lacuna that exists in the country. Even when such a structure was to be in place, low-income parents in remote areas could neither afford the sophisticated devices that many of the remote learning platforms operated on before now, nor could they purchase the large volumes of data needed to maintain regular connectivity.

In addition to this, many of them reside in hamlets, settlements, and distant communities where fast 4G networks, which the prominent platforms recommend for smooth usage, are largely inaccessible.

It is against this backdrop of the pathetic state of affairs in the sector (viz-a-viz the glaring education inequality) that the new platform is designed to deliver quality education to rural communities through the prevalent 2G network has proved both ingenious and timely. The 2G network is available in virtually all parts of the country – including typically excluded rural areas – and it is accessible on cheap, basic, mobile phones used in low-income households.

The audio e-learning platform strikes at the heart of the (digital) divide that has for long excluded children in rural communities from accessing quality education. The pandemic accentuated this problem, and the limitations of the remote learning drive, crucially that of uneven digital adoption and data cost, called for creative solutions, which have now been brought forward.

In an attempt to eliminate all kinds of barriers, the www.learnathome.radio teamed up with an indigenous telecommunications firm to offer data-free access to contents on it, while access on other networks is equally free on different days. This is in addition to the low-data consumption of the 2G network.

Othe platform is some special examination readiness series containing a series of solved past questions in WAEC, NECO, BECE, and the Common Entrance Examination from 2009 to 2020. It also features answers and explanations provided in a step-by-step, and easy-to-understand format, alongside complimentary live classes with teachers. On it, each student can self-pace learning and make up for time and knowledge lost to the pandemic.

Importantly, materials on key subjects on the platform are developed with the Nigerian Educational Research and Development (NERDC) curriculum for primary and secondary school students, while teachers and guardians too can take advantage to improve their fitness to help and direct the learning of their wards.

African proverbs and their meaning, common errors in the English language, motivational quotes, among others form the additional content that makes up the general knowledge segment of the platform.

For the Executive Director of Data Science Nigeria, Toyin Adekanmbi, the initiative represents “a creative and innovative approach to democratise learning in Nigeria and provide an effective solution to the challenge of unequal distribution of learning and education opportunities in rural and urban communities.”

She said: “The learning at home audio e-learning initiative will build on the clear successes we recorded in the quest to ensure ongoing learning for children during the pandemic restrictions, particularly those…