Should the City of Edmonds move from a one-year to a two-year budget cycle? How can the city better engage citizens in the budget process? What should the city prioritize and de-emphasize in the 2022 budget? Those were among the topics discussed during the Edmonds City Council’s budget retreat Saturday afternoon via Zoom.

The meeting facilitator was consultant Mike Bailey, a former finance director for the cities of Redmond, Renton and Lynnwood, who also ran a similar budget retreat for the council in 2020.

In opening Saturday’s meeting, Bailey noted that during last year’s gathering, many of the councilmembers were newly elected and thus unfamiliar with the city’s budget process. This year, Bailey said, councilmembers can be congratulated for adopting a number of the approximately 15 priorities they had identified as important to them during the 2020 retreat. These included hiring a full-time social worker, an increased emphasis on human services programs, Highway 99 corridor safety, enhanced support for 4th Avenue Arts Corridor, identifying park land and open space, and ensuring employee safety in light of the COVID-19 pandemic.

He also reminded councilmembers of their important role in developing policy guidance for the budget, which the mayor presents in draft form each fall, followed by council discussion and amendments based on public feedback. Under state law, the final budget must be approved by the end of the year.

Clear communication to the public about budget priorities is key, said Bailey, who described that process as “telling these stories in a way that people who are paying for the services can understand it.” 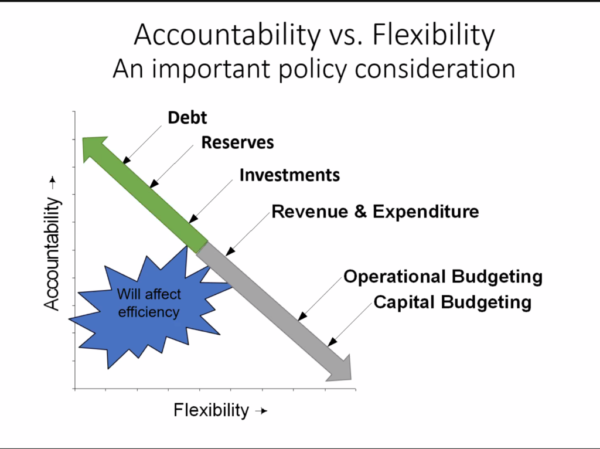 He also noted it’s important for the council to balance accountability vs. flexibility when developing budget policies. Councilmembers are responsible for oversight when the city decides to accumulate debt, dip into funding reserves or make investments. However, he added that too much council involvement in day-to-day budgeting decisions can affect the ability of staff to work efficiently. “Whenever you increase accountability and decrease flexibility, it will affect efficiency,” Bailey said.

Bailey acknowledged the difficulty of communicating budget messages during an era of remote meetings due to COVID-19 gathering restrictions. “Even though the pandemic has changed everything, the fundamentals have become even more important,” he said. Under these circumstances, it’s key for councilmembers and staff to be prepared so they can communicate effectively, and in a thoughtful and respectful way, he said.

Bailey also listed several other sample topics the council could consider when developing budget policies, including whether to adopt a priority-based budget, and the possibility of changing the budgeting cycle from an annual, one-year process to two-year, biennial budgeting.

Councilmembers then were asked to review how last year’s budgeting process went and also discuss their priorities for 2022.

One area of concern for some councilmembers was the need to have discussions on the city’s Capital Improvement Program (CIP) and Capital Facilities Plan (CFP) earlier in the budget process, as that work involves long-range planning and can inform budget priorities. Last year, the CIP and CFP were reviewed at the end of the budget process, and as a result the discussion was rushed, Councilmember Kristiana Johnson said.

Councilmember Diane Buckshnis agreed, stating the city spends most of its discretionary funds on the CIP and CFP. “This is the tool that should really be a high priority for the council,” she said.

Councilmember Vivian Olson said that in developing the budget, she would like to see the city do a better job of “harnessing the power of volunteers” to help with city projects, simliar to how the Edmonds Chamber of Commerce uses volunteers extensively to put on events. Similiarly, citizens should be better engaged to identify budget priorities that they can “stand behind and be a part of,” Olson said.

Councilmembers expressed a range of other ideas during a round-robin discussion, including the following:

Luke Distelhorst said he would like to focus on transportation mobility and how people get around the city, “looking at the whole chain” from sidewalks to bike lanes to trails to ADA access to tripping hazards. Another priority Distelhorst listed was creating a city office of human rights — an idea also supported by Councilmember Laura Johnson.

Laura Johnson also said she would like to see increased accessibility “especially around disability language and anything to do with how people people move around Edmonds,” as well as ensuring that government services and communications are accessible to all city residents.

Adrienne Fraley-Monillas stressed the importance of implementing the city’s plan to enhance Highway 99 and also create a satellite city office on the highway. That priority was also listed by Distelhorst.

Susan Paine said she would like the council to focus on the city’s downtown BD1 zoning code design standards, “just in case there’s an earthquake,” to ensure that during a rebuilding process the city can “help keep Edmonds looking like Edmonds.”

Kristiana Johnson said she would like to see the city update its strategic plan, which was approved in 2013 after extensive public involvement. Among the priorities developed through that plan were the construction of a new senior center and a downtown restroom, and those have both been completed, Johnson said, adding that’s why it’s important to “keep the strategic plan relevant in our budget process.”

Vivian Olson said her top priority was building maintenance and also taking a closer look at the city’s aging infrastructure, with the idea of reviewing the city’s existing building assets to determine if there are some the city no longer needs.

Many councilmembers said the city should focus on its watersheds and their role in salmon recovery, including the Edmonds Marsh and Perrinville Creek. Laura Johnson and Susan Paine also talked about the importance of urban forestry management in relationship to watershed protection. Luke Distelhorst suggested working with the Washington State Department of Transportation to mitigate pollutants from Highway 104 ferry traffic that end up in the Edmonds Marsh.

Other priorities mentioned include:

– Preserving the walkable nature of Edmonds. (Vivian Olson). She noted that the community’s robust discussion about a plan to add bike lanes in Edmonds neighborhoods has highlighted how much residents value walkability.

– Social justice. Vivian Olson stressed the need for “full commnity engagement about justice and how we want to approach that as a city. We care about that.”

– “Equity and inclusion for the other side of Edmonds” was a priority listed by Fraley-Monillas, who lives in Edmonds’ Highway 99 area, noting the neighborhood has few sidewalks and street lights, and just one park with few parking spaces. “Having equity there is an important piece,” she said. “Until we start looking at this from an equity lens nothing is going to change.”

– Better communications with residents. Kristiana Johnson wondered if the city was making the best use of its communications officer, particularly when it comes to serving city boards and commissions. Distelhorst — who works in communications for Communty Transit — noted that the city’s public information officer position is only part-time and he sees the value in expanding the communications staff. Olson added…